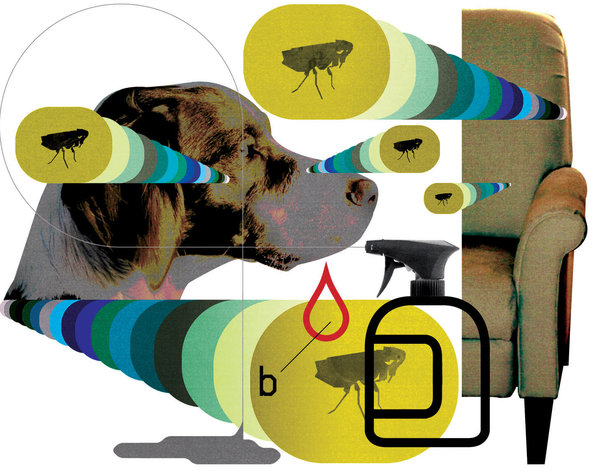 Are fleas making a comeback?

Some pet owners think so. Over the past few years, anecdotal reports from dog and cat owners around the country suggest that the bloodsucking parasites are getting more difficult to control, despite the use of once-revolutionary topical flea treatments.

But veterinarians and flea product makers say the products work when used correctly, and that many pet owners may be making mistakes or have unrealistic expectations about how the treatments work.

Last summer, Mark Conrad a freelance photographer in Fairfield, Conn., noticed his golden retriever Tia scratching more than usual. Mr. Conrad said he suspected an allergy rather than fleas because the dog had been treated diligently every month for three years with a leading flea treatment that contains the chemical fipronil, which has been shown to be highly effective against fleas. Soon, however, he discovered that his dog and home were infested with fleas.

“It was a nightmare for two months,” he said. “Tia was miserable, and the fleas just kept coming back.”

Because the dog had already been treated for fleas, Mr. Conrad tried using a flea comb, natural remedies and flea baths, and even spraying his yard, but nothing helped. He came across other pet owners who were beginning to doubt the efficacy of fipronil. When it came time to treat Tia again, he switched to another topical solution that includes the active ingredient permethrin. The fleas finally resolved, and he decided to stick with the new treatment.

Veterinarians said they hear stories similar to Mr. Conrad’s all the time, but that there was no convincing research to suggest that fipronil or other leading flea treatments have become less effective in most areas.

Michael W. Dryden, a professor of veterinary parasitology at Kansas State University, has conducted numerous studies on the efficacy of flea treatments. Dr. Dryden, who is commonly called “Dr. Flea,” said there are some areas, particularly in the southeastern United States, where flea populations are strong and some treatments may not be working as well as they did 10 to 15 years ago. However, flea products continue to work well in most parts of the country, so the real issue is educating consumers on the best way to use the products and what results to expect.

“Most of us, by the time we start treating fleas, our homes are already infested,” Dr. Dryden said. “No home is ever under control in a week, and it can take weeks or months in some homes. It can take time for a flea infestation to be gone, and that has nothing to do with resistance.”

Christine L. Cain, an assistant professor of dermatology at the University of Pennsylvania School of Veterinary Medicine, said that even among pets being treated for fleas, outbreaks can occur. Missing a monthly treatment by even a few days can be enough to give fleas a foothold, for instance. Sometimes, particularly in pets with long hair, a topical treatment may not be applied correctly or may inadvertently be washed off before it has a chance to be absorbed, she said. A pet that comes into contact with an infested animal at a dog park or in the wild could also develop a temporary flea problem, since most monthly flea treatments prevent long-term infestation but don’t repel new fleas.

“A lot of times what people are perceiving as resistance may not be true resistance,” Dr. Cain said.

Topical treatments revolutionized flea control when they were introduced in the 1990s. Most of the treatments are applied to the skin between an animal’s shoulder blades. The chemical is absorbed into the sebaceous glands across the animal’s skin but does not get into the bloodstream. The treatments do not repel fleas, but those crawling on an animal will absorb the chemical and eventually die, usually within four hours.

Several new flea control products have been introduced recently, including monthly pills and long-acting collars, available through veterinarians. The oral pills are easier to use and less messy, but some pet owners still prefer a topical treatment. Dr. Cain said that when a pet develops a severe skin allergy to fleas, a pet owner may use a combination of topical and oral treatments to protect the animal.

Michael Murray, a veterinarian and technical marketing director for Merial, a unit of Sanofi, the company that makes the Frontline flea treatment, said that a rainy summer can trigger a “flea bloom,” causing a population explosion among wild animals. The fleas can then get in the grass, exposing treated pets to more fleas.

During a flea bloom, even animals treated with a topical solution are vulnerable. If treated properly, the fleas will die off, but not necessarily before owners have caught sight of the fleas on their pets.

“These products don’t work instantaneously,” Dr. Murray said. “When there is a lot of exposure during a flea bloom, people are more likely to see the pests and conclude the product is not working.”

Dr. Murray said owners who have treated their pets properly need to be patient and allow the product time to do its work. If an owner has missed a treatment, it may take longer to rid the pet of fleas.

By the time owners notice fleas on an untreated animal they are probably seeing a second or third generation, Dr. Murray said. “That means by the time you start treating your pet you’ve got this massive amount of flea biomass in your home, flea larvae and pupae,” he said. “It can take as little as three weeks or as long as several months for that to run its course.”